The video support material comes directly from a presentation of work at the end of a one-week development workshop in December 2012.

The material is taken from a limited amount of interviews and is supported by some material from Gabriel White’s documentary film ‘The Unplanned Masterpiece’. Additional footage was shot in the streets of central Auckland.

The text, written by John Downie and spoken by actress Anna Hewlett relates to the idea of the city and does not come from interviews. Elements of this will be used as song, the narrator voice will be pre-recorded or unseen. The final part of the workshop video features a text from Timon of Athens by Shakespeare.

The choreography attempts to associate the performers to the music rather than characterisation, closely linked to the movement of the projection screens and the scenographic elements.

The music is predominantly pre-recorded music compiled as a ‘temp-score’, as is a familiar technique in the scoring of film music. Composer Jeff Henderson will take this as the template for the live musical score.

Each clips is around 5 minutes long. 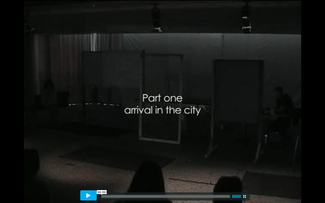 PART 1 - Click on the picture to watch on Vimeo 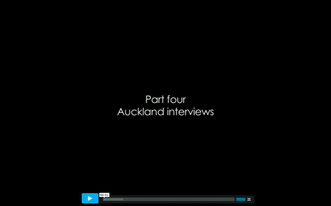 PART 4 - Click on image to watch on Vimeo
Powered by